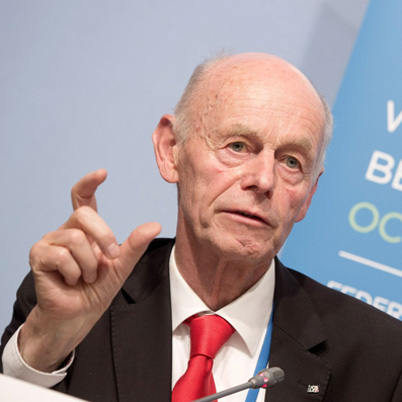 He was born in Lüneburg in 1941 and studied medicine at the universities of Würzburg, Montpellier and Tübingen, as well as spending time at the French Hospital Marrakech in Morocco on a Surgical Internship. After receiving his MD, he spent several years as a research scientist at the Clinical Research Institute in Montreal and earned his Ph.D. at McGill University.

In 1975 Detlev Ganten was appointed Professor at the Department of Pharmacology at the University of Heidelberg. In 1991, he moved to Berlin where he became the Founding Director and President of the Max Delbrück Center for Molecular Medicine (MDC) Berlin-Buch and in 1993, he became Director of the Department of Clinical Pharmacology at the Benjamin Franklin Medical Center of the Free University of Berlin. He held these roles until 2004, when he became the Chief Executive Officer at the “Charité – Universitätsmedizin Berlin”, the joint medical faculty of the Free University and Humboldt University of Berlin, until 2008. In 2009, he founded the World Health Summit, an institution which organizes an annual international conference in Berlin and regional meetings around the world, promoting dialogue between scientists, physicians, industry, civil society and policy makers.

Since 2005 Professor Ganten has been the Chairman of the Board of the Charité Foundation and since 2009, he was also made Chairman of the joint Board of Trustees of the Max Planck Institute of Colloids and Interfaces and of the Max Planck Institute of Molecular Plant Physiology. He has previously held positions as President of the German Society for Naturalists and Physicians (1996– 1998), Chairman of the Helmholtz-Association of National Research Centres (HGF) (1997 – 2001) and member of the German National Ethics Council (2002 – 2007). He is a member of the Academy of the Sciences Heidelberg, Polish Academy of Sciences (Polska Akademie Umiejetnosci), Berlin-Brandenburg Academy of Sciences, German Academy of Sciences (Leopoldina) and Academia Europea.

As a research scientist in the field of hypertension, Professor Ganten elucidated fundamental mechanisms of the pathophysiology and molecular biology of high blood pressure. His areas of research include the hormonal regulation of blood pressure, especially the renin-angiotensin system, and the molecular genetics of cardiovascular diseases. Professor Ganten is also Editor in Chief of the Journal of Molecular Medicine. Throughout his career, he has received many awards, including “Chavez Award” of the International Society of Hypertension (1981), “Sechenev Medaille” of the Medical Academy Moscow (1981), “Science Award” of the “Deutsche Liga zur Bekämpfung des hohen Blutdruckes” (1981), “Heilmeyer Medaille” of the “Gesellschaft für Fortschritte auf dem Gebiet der Inneren